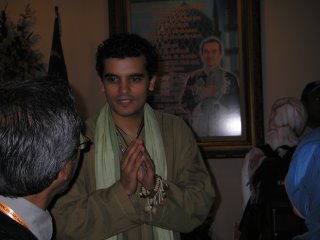 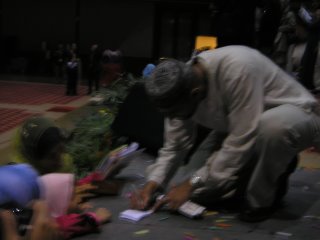 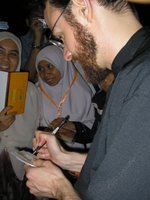 
Those two attacked me at this time, at the end of the semester, a time where students should be knowing everything what they've learned during whole semester, or at least they should be holding and sleeping with books - noticing that they knew nothing and putting their biggest effort to at least achieve a 'I-know-the-answer-smile' during the final exams.

I've strucked into the Sound of Islam Concert last Saturday night. And suddenly I burst to be liking and 'fanatising' the Islamic English songs. Especially those songs sang by Dawud, zain, and Yusuf, or any songs wrote by them. Suddenly my room is aired by those songs, suddenly I am viewing Zain Bikha's vids which I have it since like 3,4 months ago, which I never give a damn to even play the vids. Suddenly my laptop is full of Dawud's songs of advices, Zain's beautiful voice, magnificent work of Islamic music of Yusuf. All those music...

I watched a documentary 'Behind the Music - Cat Steven' just now. I thought I would just skipping through the documentary, but it was interesting - the journey of life of Cat Steven. From a boy named Joseph, to a superstar Cat Steven, to a humble Yusuf Islam. Maybe I shoul share some..

early 1970s - his songs were the biggest hits in history. Breaking through #1 in Billboard chart several times.

1978 - a visit to Juressalam changed his life. He was attracted to enter a masjid in the holy city and suddenly a Muslim asked him 'who are you?'. It was the first time he said this, 'I am a Muslim'. When he went back to his homeland, he read the story of Prophet Joseph in the verse of Joseph and was really into it.

1979 - he went to the Central Mosque, London. There, he cited the Shahadahs. Picking up Yusuf (Joseph) as his name (Joseph was his name as a kid. Surah Yusuf (Verse of Joseph) was the verse that first attracted him to Islam)

1981 - Known as Yusuf Islam, he was still known as Cat Steven among his fans. This is the year when he came out with an album, first album as a Muslim.

Mid 1980s - He was confused with many overlapping messages and information about Islamic view to music. He took the safest way - wrote songs that only consisted with his voice. He came out with an album 'A is FOr Allah'. Also set up an Islamic school in London called 'Islamia'.

1980s - 1990s - he involved in most humanitary missions throughout the world in the name of Islam. Poverty in Africa, war in Bosnia, Afghanistan.

1980s - present - devoted all his wealth as Cat Steven to spread a good message of a faith called Islam throughout the world.

I thought that Yusuf Islam was there, joining the concert at PWTC that day. He was not. But back then the concert was one of the best concert I've attended. In fact it was the first time I met with the performers of the concert. Never before I met the singers after concerts. Meeting Dawud was enough to make my heart thrumble! Haha. Standing next to a world-known singer. A man that has a talent, of voice and writting beautiful songs, devoted all that, to spread the message of Islam. 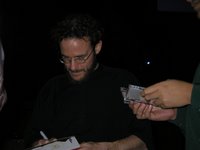 The Music. The Islamic music with full of messages bring us together. Bring us as one.

The World Cup. It comes again. There was a time when Cikgu Dani gave greenlight to watch the match between Spain and Korea. It was at his home. He was teaching us Add Mathematics. 'Nak tengok bola? Aa maghi kite nengok'. I wore Real Madrid's jersey to show my support to Spain. Fikri wore the same. Everyone were supporting Spain. For 10 minutes we were babbling 'alaa.. apsal tak gooll??', 'peh..lawa gile passing..', 'buleh tahan eh korea main?', 'spanyol nang..spanyol power do..', 'Aarr.. tu..tu.. penyokong korea tu pakai ape? macam opera da..korea bawak sami tu..tengah jampi-jampi agaknye tuh..!' I still remeber Cikgu Dani said that. Sometimes I smiled when thinking of it again. Cikgu Dani and us Fikri and me were the only male that time agreeing each other about the match. Others were female, more than 10 females, I can still remember. All were screaming when a shot to the goal was made. All were stunned when a beautiful play was shown by both teams. All will sometimes look at another's face, wondering whats in their mind and try to guest it by asking 'power ek derang main?', 'ko agak pasni gol tak?', 'ko agak die buleh score?', 'cikgu rase sape menang cekgu?', 'korea da bawak sami jampi-jampi..korea la menang!'.

We end up before the match ended. Korea won the match. I forgot the score. Spain? Huh.

And last night, the match between Portugal and Mexico. Two Latin countries seperated by Atlantic Ocean meet in a football match. Doesn't it bring both teams together? In winning-or-losing sense, maybe no, but in the spirit of sport, yes. Portugal won 2-1 in the match last night. Christiano did not play in the match though..

The World Cup. The beautiful sport bring us sit togehter and watch the match. Bring us together and talk. Bring us as one.

'Why Are The Drums So Silent?'